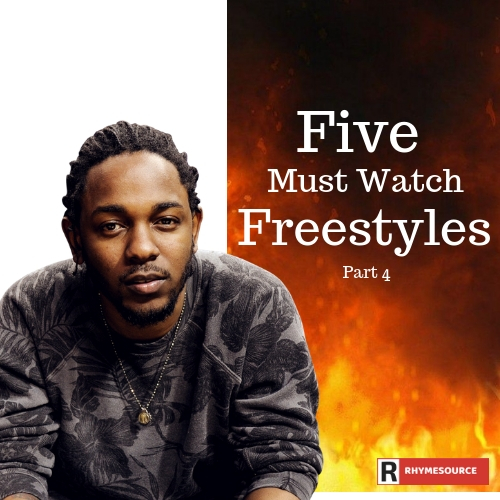 This is part 4 of the “Five Must Watch Freestyles” by RhymeSource.  It’s been about a month or so since Part 3, and WE’RE BACK. This time around we got some unique content that haven’t been around for a while. Our team went back to some throwback freestyles for some of the videos.If you haven’t read any of our previous (5 freestyles) articles we’re going to write a quick analysis of each freestyle and then quote our favorite lyric from each one. We try to mix it up with artist and shows but sometimes the freestyles are just to fire to not include.

Tory is not stranger to this freestyle work. He’s been on multiple shows doing the same damn thing every time. KILLING IT! This time around he raps over 5 different beats on Sway and goes HAM.

Damn rap really changed. 10 years ago Juelz rolled up to BET with some bars! Although it was pretty short, the freestyle was pretty solid. And it might have been off the top. I can’t really tell,  but either way it was pretty fire. Juelz always had some bars and metaphors to go with it. It’s pretty wild to see how far hip-hop has came. The beats, the flow, its all different.

Favorite Line: “My money getting chubby putting calories on”

YOOOOO!!! Why haven’t I ever seen this. SMH. This might be one of the best freestyles I heard in a while. If you don’t know who Justina Valentine is, she is most known as a cast member on MTV’s Wild N’ Out. On the show she displays her rap skills and always has some kind of bars. But this? She went CRAZY.  Not only did she do the 5 Fingers of Death challenge, but she was also including words that Sway yelled out mid freestyle. I’m not going to say anything else. Just listen!

Favorite Line: “These bit**es in the studio all got ghost, and its very scary, put em’in the cemetery”

I don’t really need to explain what these guys can do. I’m not sure if its all off the top but I would not be surprised if it is. This freestyle sounds like a song but thats just the talent they have. Each took a turn going back and fourth about three times each and showed up as they usually do.

Favorite Line: “I’ll do a 100 yard dash, just to slash Kim Kardash, in the ass, with a shard of glass from Nick Hogans car crash”

Too much talent! In this freestyle Kendrick went 6 straight minutes off the top over a handful of beats. The flow and lyrics are just too smooth. This wasn’t really a challenge or anything special for K Dot but as expected its fire! I wish they gave him words to rhyme with to make it better but that would’ve been too easy. It was definitely harder to rhyme every word off the top. Oh!!! Big Boy dropped some bars too with a little story (not real) about Kendrick.

Favorite Line: “The wicked straight from Compton, if you come to my city you get stomped in”